This Honda EU3000IS1AN Portable inverter generator is Very Quiet. The sound is low-pitched and relatively muted. More “pleasing” sound than my Yamaha 1000 inverter. Heavy due to sound insulation and large gas tank—but a worthwhile trade-off.  We’ve researched the latest portable generators, asked the experts, and scoured thousands of specs, features, and user reviews to find the best portable generators out there.

Honda EU3000IS1AN: What you need to know

This is a 3000-watt gasoline-powered inverter generator, and it is quite light and portable at 131 lbs, especially compared to other 3000-watt models on the market.

For the amount of power it can generate, the EU3000is Handi is also very fuel-efficient, running for 10 hours at 50% load thanks to a 3.4-gallon tank. With a power of 2800 watts at your fingertips, you can power all kinds of devices, such as air conditioning, charge your motorhome and use power tools. Thanks to the built-in inverter, you can also charge more sensitive electronic devices such as tablets, laptops, and telephones. You get two 120-volt outlets, but unfortunately, no USB ports.

When running, a noise level of 57dB is very quiet for a petrol generator, so you can leave it running in the background and it won’t interfere with your conversations.

Honda EU3000is Handi: Price: Honda listed the EU3000is Handi for over $3K. The EU3000is is a lot more expensive than generators of comparable power, but it’s the Honda engine you’re paying for. It is quieter than other engines and can also be easier to service as there are many places where Honda engines are serviced.

The main advantage of the EU3000is Handi is the Honda engine, which is quiet and reliable. It is quite portable, and the generator also has two wheels (optional) and a handle so you can pull it back for easy transport.

You will find two 120 volt, 20 amp outlets and a 30 amp twist-lock outlet on the unit, but there are no USB ports. Fuel is supplied by gasoline through an accessible tank on top. An Eco-Throttle switch on the unit can further minimize fuel consumption and noise levels when the generator is not running at full load.

Starting the generator is easier than other 3000-watt generators because it has a built-in electric starter. There’s a pull-start for backup, and Honda makes a pull-start version called the EU3000i Handi, which is lighter because it doesn’t have a starter.

However, the EU3000is lacks a few features – we would have liked a fuel gauge and voltage gauge, which would have been useful. There is only a blinking LED light as a meter for the total number of hours. The faster it blinks, the more cumulative uptime your device has had and needs service.

The Honda EU3000is Handi Generator is an inverter generator that produces 3,000 starting watts and 2,800 running watts of power. Generatorist.com found that it produced a very pure and stable sine wave with less than 3% total harmonic distortion, making it ideal for sensitive electronics such as laptops and TVs.

The powerful 4-stroke Honda engine sets this unit apart from the rest. With a power of 2800 watts, you will have no problem controlling large electrical appliances such as AC units. And while it’s not the quietest ride out there, it’s much quieter than much of the competition.

The EU3000is Handi is also very fuel-efficient. The 3.4-gallon gas tank will give you 10 hours of power at half load, but unfortunately, there is no fuel gauge.

If you need even more power, you can buy a parallel kit from Honda to connect two of these generators to double your total power.

The electric start makes this unit easy to operate, but that adds to the weight. If you find this model a bit heavy, the Honda EU3000i Handi model (which does not have a starter) offers comparable performance and is much lighter.

Should you buy the Honda EU3000IS1AN?

Its excellent performance makes this a great generator, but it may not be ideal for camping due to its weight. But it is certainly very powerful. You can use power tools and air conditioning and charge your motorhome.

If you’re looking for a relatively quiet petrol inverter generator, the Honda EU3000 is certainly not the cheapest model on the market, but it is one of the most reliable. The Honda lacked some of the features we had hoped for, such as a fuel gauge and USB port, and the wheels are an optional extra. Honda makes a wide range of more or less powerful generators, so if you don’t like the price of this unit and don’t need the extra power, consider the EU2200i. 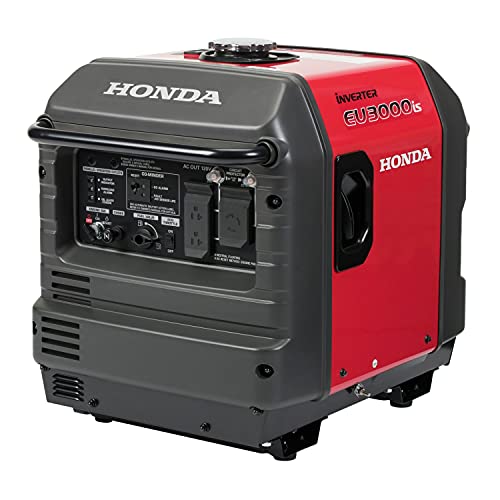 Over the years, we’ve noticed that many people are curious about the difference between the Honda Eu3000is and the Predator 3500. People aren’t just looking for the cheapest option; they’re also looking for the best deal possible.

We’ll put together a table to show you how the Honda Eu3000is1a and the Predator 3500 compare. Why is it three times more expensive than Predator? Not only the build quality, but it also offers better fuel consumption. Low noise levels make it more comfortable too.

Small TDHs (Total Harmonic Distortion) make a big difference when using this backup power source in sensitive electronics like a medical facility or laboratory. High-sensitive electronics may have issues if the generator’s THD is high. Damage is more likely to occur if the THD is too high. Generator power is not the same quality as utility power.

But if you plan to use this as a normal home backup and do not want to spend more, then you can go with Predator. Its less costly than Honda,

Nicely wrapped. Quiet. A battery is missing from the item. Hardware for connecting a battery isn’t included. The battery case has a few dings. The hardware had to be procured for a pricey product we had already purchased. We’re glad we ordered a wheeled cart carrier because this would have been a real pain to carry.

We can use it in conjunction with another unit for additional power. It’s a cinch to get going. It has the potential to last for many years to come, according to us. As time goes on, it will establish the value of the money. The control panel is simple to use. It is small, but it is also heavy. You can buy from amazon.

How much oil does a honda eu3000is take?

The EU3000i Super Quiet Generator comes with a 3.4 gallons of fuel tank capacity. So we can add around 13 litter or so. We found that this generator takes around 0.17GPH/0.68LPH.